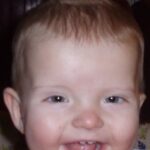 Scarlett was born June 19th, 2010. The Doctors said she was born at 37 weeks, though we disagree with them. She didn’t have any of the normal newborn reflexes. She couldn’t suckle, having to be fed by syringe. Her “soft spot” was over half her head. After LOTS of research we have decided that we think she was born at only 30 weeks. We struggled to get her to gain weight for quite some time, seeing the doctor every few days at first. We thought we were making progress and finally getting her where she needed to be.

We started to see little twitches that Scarlett’s grandmother said she wanted to keep an eye on. December 31st, 2010,when Scarltt was 6 months old, we took her into see the doctor, thinking she was dehydrated. The doctor (without actually touching or examining my daughter) assured us that she was fine and that we should just take her home and keep pushing fluids. Later that night Scarlett got very sick. We called 911 because we couldn’t move her without her throwing up. Upon arriving at Vanderbilt Childrens Hospital I was asked to leave the room to give the doctors room to work. They assigned me my own nurse to update me as she could. I sat in the hallway while they revived my daughter several times. When they had her stable enough for the doctor to step away she came out to update us. I’ll never forget the way i felt when she said “very very very very sick baby. We are doing everything we can” and asked us if we knew that Scarlett was having seizures. She told us that if we had waited any longer to call 911, our baby wouldn’t have survived. They admitted her for what was the first of many, many week long hospital stays. They told us right before releasing her that she had epilepsy, and had it pretty bad. In January alone Scarlett had over 6000 seizures, despite the meds. We held her through hundreds of infantile spasms a day. As we added more meds the seizures slowed down, but Scarlett became less and less playful and active due to the medication. She was diagnosed with West Syndrome a few months later and my heart sank. This was not what I wanted to hear.
After many months and many medications I started doing more research about the Ketogenic Diet. The results were so amazing in so many cases I wondered why we hadn’t tried this before. I pushed and pushed for this diet until the doctors finally gave in. We started her on the diet in August of 2011. We saw results almost instantly. Over the next 8 months we took her off two of her medications and recalculated the diet several times trying to get the right combination. I won’t lie to anyone. This diet is HARD! I will say that it is very much worth it. Scarlett has been on the diet for almost 9 months now, is almost two, and has been completely seizure free for 5 months. She is doing SO well, doing things we didn’t think we’d ever see. She is the happiest child and has an amazing disposition. She is trying to walk, babbles all the time gives the sweetest kisses. We go to see the neurologist in June to discuss taking her off another medication. There is hope! There is a chance that in a few years she could be medicine free and still not have seizures. I can’t say thank you enough to the people at Vanderbilt, our family and friends for helping us get to this point. Its been a VERY hard road, but so worth it every time i see Scarlett smile!
[/framed_box]