It was March of my freshman year of high school. My childhood dream had come true, and I was just finishing my first season on the high school basketball team. On the way home from school that Friday, I was in a car accident with four other girls. An ambulance rushed me to the hospital and I was unresponsive. March Madness had officially begun.

After a week-long coma, I awoke. My parents explained that I was in a bad car accident and as the car hit a tree on my side, I hit my head and suffered a Traumatic Brain Injury. A TBI is what they called it. I had no recollection of that March 6th day. I looked in the mirror and saw the same girl that I remembered. But as I looked closer, I saw big brown spikes of hair standing straight up on the left side of my head. My mom explained that they shaved my head in the ER to monitor the pressure in my brain. I was disappointed, but also relieved that after such a serious accident, all that had changed was my hair.

I began rehabilitation, which included physical, occupational and speech therapies at a local rehabilitation hospital. It was there that I began to realize that I wasn’t the same girl I was before the accident. I was having trouble finding words and holding on to conversations; naming objects that I used everyday had become so difficult; putting simple puzzles together took longer than it had ever taken before. It wasn’t just a clump of hair that was missing—for the first time, I could tell that I was more damaged on the inside than on the out. Something that would always be difficult for people to understand.

Four years later, I accomplished a huge goal of making it to nursing school. During my second semester, I had a presentation to give to my entire class. I felt prepared and excited as my name was called, and I walked to the front of the auditorium and began speaking. A minute or so passed by and things were going well. But all of a sudden, out of nowhere, my heart began to race—not out of nervousness, but more like I was running from a train and couldn’t get away. I kept trying to swallow, but my mouth was too dry. I had prepared for this presentation, but the words I was planning to use just weren’t coming out.

I tried to take some deep breaths to relieve what I thought was nerves, but I couldn’t even gather the breaths. The scariest part was knowing how important it was to make eye contact with the entire audience during a presentation, but for 15 seconds I felt paralyzed and blankly stared, unable to look away from one side of the room. After what seemed like forever, I regained my composure and was able to finish the last minute or so of my presentation.

A nursing instructor who saw my presentation that day encouraged me to see a neurologist. I had a few more of those panicky moments until my appointment a few weeks later. The neurologist explained to me that those “spells” were complex-partial seizures, and that since I had already had more than two, that meant that I had epilepsy. He stated it so casually: “You have epilepsy.” I had only heard about it a few times during nursing school, didn’t know anyone else who had it, and had no idea what that meant or how it would affect my life. The journey was about to begin.

Once epilepsy was diagnosed, I was immediately put on a medication. I had never been on a daily medication, so it was tough to get used to at first. It made me a little tired, but I attributed it to school. Between the long hours of homework, clinicals, tests, and lack of sleep the seizures continued. I wasn’t comfortable telling fellow classmates or my instructors about my new diagnosis. I was embarrassed and didn’t want the extra attention or stigma that epilepsy presents. My newly diagnosed epilepsy and the long-term effects of my TBI were making school more and more difficult. As college continued, so did seizures. I had to start two additional epilepsy medications, their side effects alone making school days more difficult. Dizziness, nausea, extreme fatigue, difficulty concentrating, double vision, and memory problems affected me daily.
The next nine years I faced many challenges related to my epilepsy. Two years after I got married, I was blessed enough to become pregnant. This exciting news brought a whole new aspect of epilepsy into my life. I learned that I needed a high-risk OB, and that because of my medications, there was a greater risk of birth defects. My seizures continued throughout my pregnancy and became significantly worse after my son was born. At a time when I was supposed to be bonding with my baby, I found myself laying in my bed dizzy and vomiting. The room was spinning, I was exhausted from my four medications, and I was becoming hopeless. I struggled daily not to let seizures define me, but as the year went by, my seizures persisted and got worse. Despite trying to remain positive on the outside, on the inside I was losing my confidence, my independence, and my self-esteem. I knew that something had to change. That is when I finally decided to pursue epilepsy surgery.

I underwent months of extreme testing to see if I was a candidate. When I finally found out that I was a candidate, I made the scary decision to go forward with a Temporal Lobectomy if it meant that I could have a chance to increase my quality of life. Epilepsy surgery was an intense two-part surgery. EEG leads were placed directly on my brain to find the exact location of seizures for the first stage. Three days later, a neurosurgeon removed a portion of my temporal lobe. The surgery was intense and the scariest thing that I have ever done. But it has been worth it ever since.

I remember taking a shower at the hospital for the first time since my skull was cut open. As my mom was washing my hair and trying to avoid the incision, chunks of my brown strands were falling out. As I stood there full of emotion, I realized how similar my experience with surgery was to my post-accident experience.. This time though, I realized that while it looked like all that I had been through was a change in hairstyle, it meant that life again would never be the same. I have been seizure free for 11 months—the longest stretch in the last 9 years that epilepsy has ruled my life.

I consider myself so lucky to have this outcome so far, but I also realize the hidden gifts that epilepsy has brought into my life—pregnancy with epilepsy, a career with epilepsy, raising awareness. Now I know that even if I’m free from seizures forever, it will always be a part of who I am. 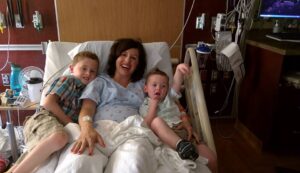 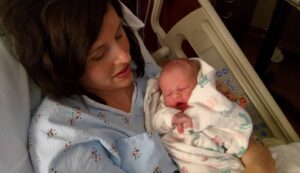 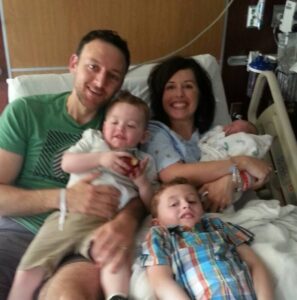 It has now been 4 years since the temporal lobectomy to treat my intractable epilepsy and oh what a journey it has been. I remain seizure free and along with it has come a lot of emotional healing. A new sense of self confidence; that seizures will no longer define me.

I’m able to drive and work and take care of my kids without worrying constantly about having a seizure. I have had 2 healthy babies since brain surgery; the newest one is only 6 weeks old!

I have also fulfilled a lifetime goal of starting a camp for kids with Epilepsy. Camp YouCan serves kids in Nebraska and Iowa with Epilepsy. The camp experience provides a chance for amazing and strong kids to come together for a weekend to climb a ropes course, go fishing and boating, shoot bow and arrows, and dance the night away with kids who can truly understand the trials that come along with Epilepsy. Campers have a chance to try new things and increase confidence and self esteem all while making new friends and conquering their fears. A very special time!

It has been a journey of ups and downs and all around with Epilepsy. And although surgery has been a success and has opened many doors, I still face the fact that Epilepsy is a chronic condition. I will always be on seizure medications and my short term memory and word finding will always be a struggle and weakness. But seeing that there are other Women with Epilepsy has been a huge gift in knowing that I am not alone and that my future continues to look bright.