Tell us a bit about yourself. 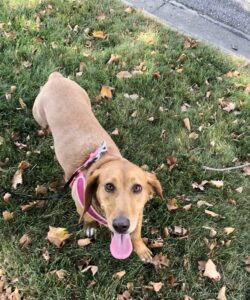 I moved around a lot growing up – lived in Oregon, California, New Jersey, Hawaii, and Kentucky – but sort of consider Louisville, KY to be my hometown as that’s where I went to college and medical school.  My husband is a lawyer and I have a great dog named Zoey who is a basset hound mix and is essentially my furry child (no actual human children so far).

Why did you go into medicine and specifically neurology?

I was always interested in the medical field as both my parents are in healthcare, so it was a natural choice for me. When I was in medical school, I found that neurology was fascinating and challenging because it was an area that many people found to be a “black box” – that is, highly complex and not fully understood.  I was excited about the idea that there was so much to discover and learn about neurology. I’m glad to say that neurology is a very rewarding field and this is an exciting time to go into neurology because there are so many new treatments coming out for neurological diseases.  Once I started my neurology residency, I also became more interested in epilepsy in particular as I find that managing epilepsy to be very rewarding and there is an opportunity to make a significant difference in the quality of life of patients who have epilepsy.

What made you decide to focus on women with epilepsy?

During my residency I have realized that women with epilepsy have unique questions or problems that are not always emphasized or talked about and require different management.  Questions such as how to ensure a safe pregnancy, breastfeeding, talking about contraceptive options, ensuring proper bone health, and managing catamenial epilepsy (having seizures frequently during certain times of the menstrual cycle) are all important considerations.  I am thankful that at Ohio State the management of women with epilepsy has been emphasized and I feel like I have a good foundation to learn upon as I enter fellowship and the rest of my career.

What are your plans after residency?

I am doing a fellowship in epilepsy at Case Western University.

Where do you see yourself in 5 years?

I want my career to focus on patients with epilepsy and so plan on finding a job as an epileptologist.  I would also like to get involved with some clinically based research.

What would be one piece of advice you would give to women and girls living with epilepsy?

I would recommend that you try not to let self-doubt or fear limit what you can do in your life.  I think for women and girls in general, there is a bias that society has against us and overall, we are viewed as “less capable” than men.  In general, this bias tends to be not overt but more subconscious, yet I think most of us have still felt at times that are we not smart enough or strong enough or just overall not good enough to accomplish great things. On top of this, there is a lot of misinformation about being a woman with epilepsy.  I have heard many female patients say that they have been told they could not become pregnant or have healthy babies, or that they would not be able to finish college or have a job/successful career.  These are unfounded statements; epilepsy may affect your lifestyle to some degree but should not prevent you from living a normal life or having children.  So I would say it’s important for all of us to have confidence in ourselves and not let other people define what you can or cannot do in your life.

What do you like to do when you are not working? 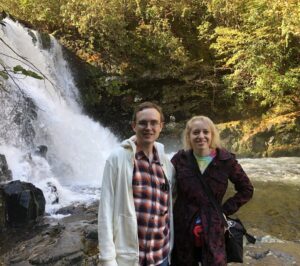 I tend to pick up new hobbies all the time! Recently I started to teach myself how to bake, and I’ve also started weight-lifting (contradictory, I know).  I’ve found that getting in shape and adopting a healthy lifestyle has been incredible and has generally helped improve my mood and self-confidence, although it’s definitely been challenging to stick to a new routine.  I also enjoy reading and journaling.

Tell us one thing that most people don’t know about you.

I have a complicated name, but my first name is basically just the Greek version of Maria or Mary.  Also, for some reason my first name is technically/legally hyphenated with what I consider to be my middle name (Marika-Foteni but I just use Marika) which in my opinion is just unnecessarily complicated and actually has led to a lot of confusion over the years.   In fact, I accidentally forgot to put the hyphen in my name when I filled out paperwork to take the MCAT (medical school admissions test) and they actually refused to let me into the test; I had to take it in another state at a later date!