My epilepsy story began when I was 3 years old. I came down with a severe case of Roseola and had a really high fever. One morning my mom came into my room and found me having a seizure. No one knows exactly how long the seizure lasted, but if a seizure lasts for a prolonged duration in an infant it could lead to brain scarring. My mom rushed me to the doctor and at the time there was no apparent cause for concern as I was still acting normal. So the doctor advised my mom to break the fever and eventually I got better.

A few years later and I had another seizure. I was 8 years old living in Reseda when the Northridge earthquake hit and we were in the epicenter. Before the earthquake we were in the process of moving. My folks had just purchased a new house, and the house that we had been living in at Reseda closed escrow the day before the earthquake (talk about lucking out). The new house we were going to be moving into was a major fixer upper so we weren’t going to be moving into it for a while. Once the earthquake hit, my parents packed everything up, put it in storage, and we moved in with my grandparents till our new house was ready. I also started a new school shortly after the earthquake, and there was simply a lot going on.

Needless to say one morning while we were living with my grandparents, I was sitting in the bathroom watching my mom do my sisters hair before school. Suddenly it hit and I had a seizure. I could see my face getting all distorted in the mirror as my muscles twitched uncontrollably. As I was seizing I managed to get my mom’s attention. She immediately screamed for my dad who grabbed me and through me down on the bed, and the seizing shortly stopped. For about 15 minutes after I couldn’t talk. My speech was slurred and distorted. Finally I came to and that day was spent in and out of doctor’s offices as my parents tried to get answers as to what just happened.

At the time the doctors brushed it off attributing it to the stress I’d been going through between the earthquake, move, and new school. My parents were told that if I had another one, the doctors would put me on medication. About a week later it happened again, this time at school. I was on the play yard waiting in line to play tetherball. I got to the front of the line and just when I was about to step in the seizure hit. Everyone around me freaked out except for one girl that grabbed a yard aid who immediately sent me to the nurse’s office. Shortly after that incident the doctors put me on medication.

I must preface that there is a tad bit of family history with seizures. On my mom’s side I have an uncle and cousin that both have a nervous twitch which may or may not be epilepsy related. On my dad’s side I have an aunt that has had a few seizures in her life, but she has also had issues with substance abuse so we are not sure if one is related to the other. The only way to know definitively if my condition is genetic is to run tests on everyone, which is not going to happen since it won’t change matters with me. My condition is a mystery as it could be genetics playing a roll, or it could be brain scarring from the fever I had when I was younger.

Nevertheless, after the seizure on the play yard my Neurologist speculated that the seizures I’d had were probably a childhood thing and that I’d eventually out grow them. Around age 13 I started having normal EEG’s and the Neurologist took me off medication. A year later I started having uncontrollable twitches. They weren’t full blown seizures, but twitches that were epilepsy related. Thus, the Neurologist put me back on medication. Another few years went by, and in 10th grade I started having normal EEG’s again, so the doctor took me off the medication. A year later I was put back on the medication for the same reason as I was having uncontrollable twitches. I remained on the medication for the rest of high school and all throughout college. When I graduated college, my Neurologist considered taking me off the medication once again, but before he did he had me consult an Epileptologist, someone who specializes strictly in Epilepsy.

This time the Epileptologist did a video monitored EEG on me. Unlike the ordinary EEG’s where they strap wires to your head to measure your brain waves, in a video monitored EEG they have you stay in the hospital for a couple days in a controlled setting, strap wires to your head, and record you on video to see if any activity occurs. While I was in the hospital, they took me off my medication. Sometimes the medication can mask the underlying activity giving you a normal EEG, but then once taken off the medication activity may still occur. Sure enough I had activity. I didn’t have a seizure while I was in the hospital, but there was activity on the EEG. 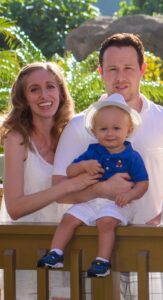 The results of the video monitored EEG concluded that unfortunately epilepsy is something I will never out grow, and I will indeed have to be on medication the rest of my life. At first I was very depressed about this. However, I have come to realize how lucky I am. My epilepsy condition is minor. As long as I take my medication I’m fine and can still lead a normal life. There are many epilepsy patients, and even other patients such as cancer, diabetic, or paraplegics, who have it a lot harder than I where their condition is so debilitating that they cannot lead normal lives. If all I have to do is pop a pill everyday and I’m fine, then I have nothing to complain about. My condition humbles me, but it does not define me. I’ve been blessed with a loving husband and wonderful son. My son is 1 year and I was on Lamictal all through my pregnancy. So far there are no signs of epilepsy in my son, nor any signs that the medication had any type of impact on him. This is all more than I can ask for, and I am proof that it is possible to be successful and lead a fulfilling life with epilepsy.