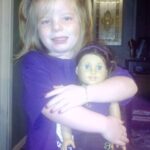 We knew febrile seizures were likely when Addison was born in Feb 2007. I had them, her daddy had them, and so did her big brother. So when she had her first febrile seizure at 9 months, it was not a big shock. We thought she had outgrown them; her last was Dec 2009 and she had a 105 degree temp in 2010 without one.

Christmas Eve 2010 she had another; waited for an illness that didn’t come. Never reported this one since it was a holiday. Feb 11, 2011 was probably the worst day of my life. Addison stopped breathing in my bed. She went from singing a song to blue. When she finally began breathing she acted post-ictal, so we went to the ER. Dr. thought her tonsils blocked her airway. Her pediatrician gave us this one as a freebie because unable to determine which came first the apnea or the seizure and we got her tonsils out the next week. No more worries, right?

June 6, 2011 is another worst day. She had her usual stare off into space seizure but this time it got a little weird. She began to sing and dance in a voice that was not hers and the dancing continued even after laying her down. After 15 mins, she went into her post-ictal stupor. This warranted a call to the MD. When the doctor calls you back instead of the nurse you know it cannot be good. Words like “unusual seizure disorder” “temporal lobe” “EEG” and “medications” are not what you want to hear when it comes to your beautiful four year old daughter. EEG was done and normal and we were referred to a neurologist 3 hours away. June 27, 2011 she was diagnosed with complex partial seizures and started meds twice a day. MRI the next month was normal and now we got to hear more reassuring words like “good chance she will outgrow it” and “seizure free for 2 years we can go off meds”. Two years seems like a long time. She has had 5 seizures since meds, hospitalized once due to a UTI increasing her seizures and meds increased twice. We went 5 months without one until 2 weeks ago.She also started school in Aug which she loves, played soccer in the fall, and softball in the spring. She also participates in dance and gymnastics.

I am not willing to let this disease win. My daughter was born with 2 holes in her heart. My favorite words from her cardiologist were “she’s beautiful but I don’t want to see her again.” I am waiting for her neurologist to say the same thing. I talk about epilepsy often. This is going to be a part of her life for a while if not forever. Recently read a post online were a little girl said she “hates” herself for having epilepsy. If we can’t have a cure, we need to at least reduce the stigma. Hard enough for our little girls to become women without anything added. Her pre-K class rocked purple shirts on Purple Day and it melted my heart to see her friends so excited to support her.
[/framed_box]